What’s white and black and AWESOME ALL OVER?

My Bondi Bands. And yes, I say that in plural. Because I have 4. Here’s my collection (so far): 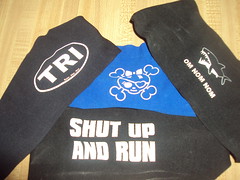 But only one of those was given to me by the wonderful people at  Bondi Band, as well as the rest of Team Shrinking Jeans, when we met Bondi Band in San Diego at the Rock N Roll Half-Marathon.

Aren’t we purty? (I’m the one in the tutu.) I really loved Heather’s and Christy’s Bondi Bands too, they’re purple and bedazzled… 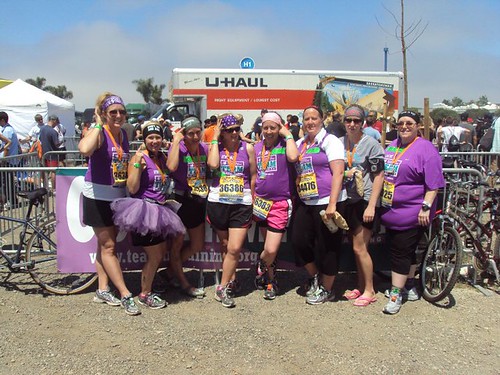 It’s not a secret. I love Bondi Band. And I’ll tell you right now that this is less of a review and more of a shout my favorites from the top of the rooftops!!!!!

I first found Bondi Band last year at the Gasparilla Half-Marathon in Tampa. They had a booth at the fitness expo and I bought that blue one with the pirate girl on the front, because the Gasparilla thing is all about the pirates. It’s super cute. And it was just $5. Yes, it was on pirate special. I ran into Bondi Band again when they had a booth at St. Anthony’s Triathlon in St. Pete in April. (These people are everywhere, sheesh!) They had a Bondi Band with a shark on the front that said, “Om nom nom.”

Hilarious! There is no better way to fight off a fear of sharks in a triathlon than to make fun of yourself by wearing a Bondi Band with a shark on it that is pretending to eat you. It was my favorite by far and I needed it! (Also pictured above.)

But aside from the sayings and the pictures on the Bondi Bands, they have actually solved for me an actual medical problem. I always have to pull my hair back when I exercise because my hair is floppy and I sweat like a hog. The only problem with that is that I always get headaches from hairbands. They’re always too tight and I get a headache from wearing them and after a while, the headache actually turns into a migraine. So finding a great headband to wear is actually a really important medical preventative for me! Because when I get migraines, I’m down for a whole day. Maybe two!

When I found Bondi Bands, I was ecstatic. Because they can be as wide or as thin as you want them, but most of all, they are not tight, yet they fit your head snugly, and they are also moisture-wicking. They are so, so thin and they keep my head nice and cool, whether it’s in the middle of a spin class with no air conditioning (cruel, isn’t it?) or outside in the 100 degree heat and humidity in Florida. I can actually go without a hat, and instead slap on a Bondi Band and it keeps my head cool.

The one I got in San Diego from Bondi Band is actually my very very super-favorite. It says, SHUT UP AND RUN. 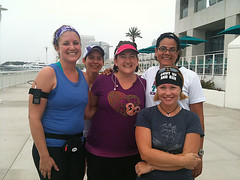 Which is not meant to tell you to SHUT UP AND RUN (unless you want it to), but for me to just shut my piehole and run already before I find a million excuses not to. And wearing SHUT UP AND RUN happens to make me feel a little badass. (Can I say that here?)

“I love my purple-polka-dot-sparkly Bondi Band so much. I have never gotten more compliments on a piece of running gear!” – Christy, our fearless Leader

“I’ve actually met a few new people at my gym since I’ve started wearing my “Suck It Up” Bondi Band.  People keep coming up asking me where I got it.” – Mel, Team Shrinking Jeans

“I triple heart my Bondi Band and wear it every chance I get!  I’ve had several runner friends of mine comment on it as well.  I like it so much that I want to order some more.”- Lisa, Shrinking Jeans Writer and Team Shrinking Jeans Runner

“The Bondiband is awesome. It is the one headband that is so comfortable that I don’t notice it but it helps keep the sweat from dripping down my face.  Love my “Runner Girl”!” – Kirsten, Team Shrinking Jeans

“I love, loved my Bondi Band! It stayed put every mile of my 13.1 and love how it reminds me to just “breathe”.”- Melissa, Our Other Fearless Leader and Team Shrinking Jeans Runner

“Love mine because I only have to put it on once! The other ones I’ve tried slowly slip back and eventually pop off, but the bondi band stays on for the whole run – even if it’s 13.1 miles!” – Jessica, Team Shrinking Jeans

“I got so many compliments on my disco-esque purple Bondi Band. Even better? It stayed put on my freakishly shaped head. That, everyone, is a miracle.” – Heather, Shrinking Jeans Writer and Team Shrinking Jeans Runner

How’s that for testimony! I pretty much am a Bondi Band website stalker. I go to the site and find a million slogans that I want. (Go there and see, seriously, there are a million.) They come in every color (but for some reason I always go for the black and white ones).  And their prices make it too easy for me to keep wanting more. Because they’re only 8 bucks a pop. Darn you, wonderful slogan-and moisture-wicking-hairband makers! I love you!

My Bondi Bands inspire me. And I’m always looking for inspiration.

So, what do you think? Do you want one?

Because we’re giving a Bondi Band away to one lucky reader! And it could be you! Here are the rules:

1)Head on over to Bondi Band (www.bondiband.com) and leave a comment below telling us which one’s your favorite.

2) Get an extra entry by becoming a fan of Bondi Band Facebook (and leaving us a comment telling us so!)

3) Get another entry by Tweeting about the giveaway and using @BondiBand and @shrinkingjeans in the Tweet.

4) Finally, a 4th entry for blogging about it and linking back to the contest.

(Make sure you leave a comment below with each entry.) Contest ends Tuesday, June 29th at 12 a.m. pt! We’ll announce the winner on Wednesday!

Disclosure:  Team Shrinking Jeans received Bondi Bands  for purposes of review. No monetary compensation was provided. Of course, as always, the opinions expressed are our own.