I am training for the San Antonio Rock n Roll 1/2 Marathon in November.

My long training runs are quickly ramping up in the mileage department.

My friend Amanda joined me for the first half of my run.  We wanted to take a picture and were having problems doing it ourselves.  Two male runners stopped and one offered to take our picture.  Cool.

Except that according to him, he had just finished 50 miles (ha ha) and his hands wouldn’t stop shaking.   Take after take trying to get a shot of us.  His friend joked about us putting the photo on Facebook, which made me crack up because um yeah, duh- I’m putting it on Facebook.  Then as the runner/photographer is attempting once again to take our picture, he quips- Well, at least your boobs will be in focus.

Amanda and I pause in our banter and then we BUST OUT LAUGHING.  OMG, we couldn’t stop laughing.  Some strange runner dude just told us that he was focusing on our boobs and it was the most hilarious and random thing E-V-E-R.

Only with Amanda do these bizarre things happen.  I love having a friend to run with- we have the best time. 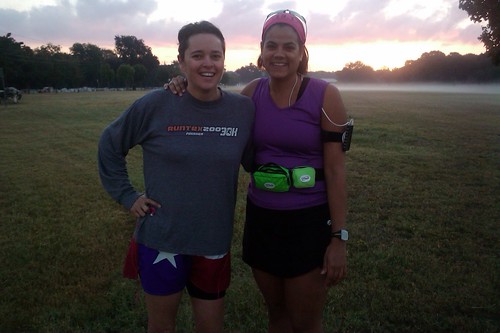 I have to say, too, aren’t we looking skinny?!  We have both lost some major weight since the last time we took a picture together- how awesome is that?!!!!