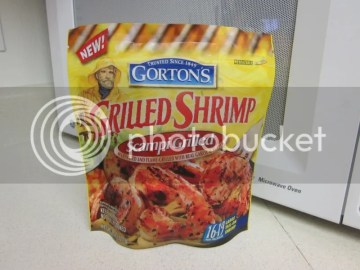 I had been hearing a couple of my other Weight Watchers friends talking about how good these were, so I grabbed some in the freezer section when I went shopping last weekend.  If scampi isn’t your thing, they have a Classic Grilled variety as well.

As I mentioned, I was interested in something quick and this certainly fit the bill in that department.  These shrimp can be prepared by any one of three different cooking methods:  microwave, conventional oven, or on the stove top.  Regardless of the method you choose, the shrimp will be ready is less than 15 minutes!  Even though I was super hungry, I opted to go with the stove top method which does have the longest cooking time.  The instructions called for adding 2 tsp of oil to the pan, but I only used 1 tsp and it was MORE than enough.  In fact, I might leave it out completely next time.  I snapped a photo right before I pulled them out of the pan to serve.  Don’t they look great?! 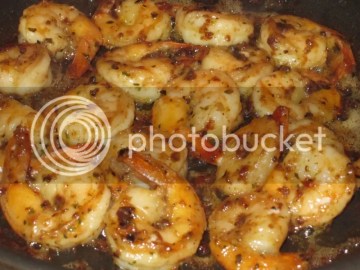 The bag contains two servings which is great for me because I was able to have one serving for dinner and took the rest for lunch the next day in one of my Easy Lunchbox containers.  I paired both meals with some steamed veggies and sprouted brown rice.  It was seriously yummy which fulfilled my tasty requirement, too.

As for not blowing my Weight Watchers points bank, this is a winner!  It’s only 3 PointsPlus value per serving which is approximately 8-9 shrimp.  For those not only Weight Watchers, it’s 130 calories and 4.5g of fat per serving.  The only thing that I wasn’t a fan of was the amount of sodium.  It comes in at a whopping 860mg per serving which seems insanely high for just 4 oz. of shrimp.  In fact, that’s more than HALF of the American Heart Association’s latest daily sodium intake recommendation.  That means this item will be relegated to an occasional treat dinner and not necessarily a staple even though it was delicious.