One of my boys, my eight year old, has always been afraid of the water. Afraid? That’s not quite strong enough of a word. Somewhere just this side of phobic, whatever that word might be, that’s a better description. Over time he’s gotten comfortable enough to splash about in the shallow end of the pool if, and only if, he had multiple flotation devices — noodles, kickboards, mom… But trust his body to swim without these aids? Put his face in the water? Jump in the pool and completely submerge himself?  To suggest any of these was akin to making him watch  A Nightmare on Elm Street or some other equally horrifying film.

I keep revisiting the swimming issue because I think it’s incredibly important that children, everyone, know how to swim. We walk and bike along a canal, our local park has two huge ponds. For his safety and for my peace of mind, he has to know how to swim. I’ve tried to teach him myself. We tried private lessons in a private pool. We tried group lessons, hoping that a little bit of peer pressure would help him make the leap of faith. But nothing worked. 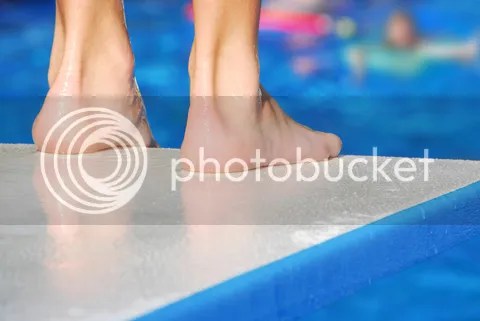 I’m writing this post during my son’s last swimming lesson of the summer. I’ve watched him float face down in the water. I’ve watched him jump off the starting blocks into the deep end of the pool. Then I watched him swim the entire length of the pool, 25 metres, completely unassisted. And I am amazed. At his courage. At his bravery. At this sudden mental fortitude that is allowing him to put this beast to rest.

Coming home in the car he said to me, “I feel like swimming has opened up a whole new world for me.” It gave me a little laugh to hear him waxing introspective, but it’s true. Not just a world in which water and pools and the seaside play a part. But a world in which fears can be faced down. In that world anything is possible.

If an eight year old can do it, I can do it, right? My big fear is heights (we won’t discuss the public speaking issue, because that would be craziness! one fear at a time, ‘mkay?) and it holds me back from so many things I would like to do. Things like crossing the rope bridges at adventure parks with the kids. Things like painting the walls or changing the smoke alarm battery by myself, because I’d need to stand on a ladder. Things like standing on the turret of a medieval chateau and looking at the beautiful surrounding countryside. I want to open up a whole new world for me, too. And I’m going to do it. Watch this space in the coming weeks to see how I’m going to face this fear down.

What’s your fear? And are you woman enough to face it?