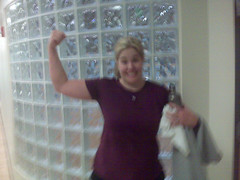 Can you believe it is the LAST DAY of 2010? When we wake up tomorrow it will be 2011, full of hopes, dreams, goals, and ambition. We can’t move on to the next year without reflecting on the year that is passing. Today, we are going to focus on all of the positives of 2010! […]

Here we are on the cusp of a new decade.  Can you believe it?  A NEW DECADE!  It seems like only yesterday that we were all heading for our underground bunkers convinced the world was going to end once we hit 2000. Personally, I’ve seen a lot of changes in the last ten years.  Marriage, […]

Here we are!!! Calling all sisters in the spirit of weight-loss and fitness! It’s day one of the first challenge of the new decade!! It’s the day we’ve all been waiting for since the cheese cube reared its ugly head during that holiday cocktail party this year! (Perhaps even longer!) Yes ladies, it’s time to […]