Back in the fall of ‘08, I came across Christie on her blog, Baby Tea Leaves. She was hosting a “Hot for the Holidays” challenge and I decided to participate. Ever since then, I have watched her succeed in goal after goal! Christie is truly an inspiration! I asked Christie if she would be interested in sharing some of her wisdom with us, and luckily she said yes! Thanks Christie! You are going to rock your triathlon!

When I was asked to do a guest post for the Sisterhood, I jumped at the chance. Because after spending three years in a size 16 and quickly approaching an 18, and actually getting to a point where relatives stopped recognizing me, I’ve learned a lot over this past year about myself and about this little thing called a “weightloss struggle”. And it all started with this picture: 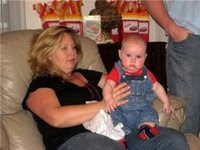 Ugh, that darned thing. But I have a hypothesis. I think that true weight loss success comes after someone hits their personal “rock bottom”. I believe this because that picture right there, that was it for me. Rock bottom. You’re lookin’ at it.

That’s me at a birthday party in February of ‘08. That’s my second baby and that picture was taken when he was about 3 months old and I was just starting to come out of a horrible postpartumness.

When I opened up this picture in my inbox one night, I cried. I got angry. I got frustrated. Because up until that point, I had been working out a few times a week and I was starting to feel pretty darned good. Oh yes, that picture knocked me down a few pegs. I wrote about it and I labeled it, “I feel like an angry fat person.” Sure my friends all tried to tell me that’s not how I actually look, that the camera lies. But we all know the truth. And the truth was, I have some pretty good friends.

I was at war with myself. I was at war with the clothing racks. I was at war with the mirror. When I looked at myself, I didn’t see the “fat” me, I saw the normal me. The softball player. The person who loved sports and cute clothes and cute shoes. It was only in pictures where I really saw “fat” me and in the dressing room, where I was waging another war. Because that’s where I would outright refuse to take the larger sizes in with me and I would insist on trying to stuff myself into the sizes I was accustomed to and I would sweat profusely from all the stuffing and inevitably I would break down and cry. In the dressing room. Oh yes, some of life’s finer moments.

It was only at rock bottom that the anger finally propelled me into actual change. After crying over this picture, without even thinking, I logged onto the internet and signed up for a 5k. I needed to do something drastic here. And I just threw it out there and asked my bloggy friends: “Who’s up for a Biggest Loser-blog edition?”

I was surprised when I actually got responses. Something wonderful was born and I learned my first lesson: that there’s safety in numbers. Because everything just works better when you have support.

Just like at the Sisterhood here, I had weigh-ins each week and prizes. I set the goal for 12 weeks and the big finale was going to be me, running a 5k. I combined my running training with weight training and mapped out my food. I switched focus. I was no longer on a quest to lose weight because now I was on a quest to just finish a 5k, and not finish last!

And I quickly learned my second lesson: the joy of the mini-milestone. Instead of letting that huge chunk of weight loom over me like a dark cloud like it had for years, I started looking at my weightloss goals in 10 pound increments. I called them “decades”. When my starting weight was 175, my goal was just to get to “the new decade of numbers”: 169. Because the 160’s just sound so much better than the 170’s, don’t they? And 150’s sounds so much better than 160’s… Before I knew it, things were happening and it felt like it was all by accident! I kept reaching new decades and boy. It felt goooood.

And then I quickly learned a third lesson: the power of mindgames! I lost weight as a side-effect to the training I was doing. I was actually more obsessed with being able to finish the 5k and less obsessed with being fat. Missing a workout wasn’t an option because I had already paid for the 5k! And who wants to waste money????? That 5k was going to be there whether I was ready for it or not and I thought, I could be the fat chick running the race, or the “fit” chick. It was my choice. And when I crossed the finish line in June, it was a symbolic moment. I was 17 pounds lighter after all that work.

I held a couple more challenges at my blog and now I’m a total of 32 pounds lighter, and since last April (and just over a year since that awful picture), I have run 3 5Ks, 2 10Ks and last month I actually finished a half-marathon. I’m now training for a triathlon in July.

I look back at that picture and I’m just the slightest bit thankful. Because without it, I wonder, what would it have taken for me to finally get the real picture? When would I have finally stepped up?

I have 12 more pounds to lose to officially get into the best shape of my life. But even now, I’m where I was when I got married and that feels pretty good.

I don’t want to pimp out my lessons and my plans as the “right” ones, I only know that this is what worked for me. In the end, I just got sick of dreaming about the person I wanted to be. I just wanted to be her already. Because let’s face it. It’s not just for me. It’s for them. 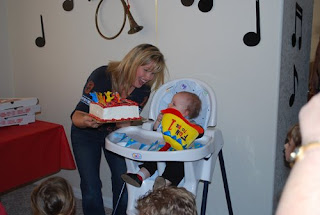