It is known as royalty among its counterparts, often referred to ask the ‘queen’ or ‘king’ of greens. You can put it in a smoothie, juice it, make chips of it, use it as a wrap, put it in a salad, or just eat it as is. I am, of course, talking about KALE.

Kale, also known as borecole, is one of the healthiest vegetables on the planet. A leafy green, kale is available in curly, ornamental, or dinosaur varieties. It belongs to the Brassica family that includes cruciferous vegetables such as cabbage, collards, broccoli, and Brussels sprouts (WebMD).

The popularity of this nutrient-packed leafy green has skyrocketed, prompting health and fitness websites, individuals, programs, nutritionists, and beginning gardeners, like myself, to take note and incorporate it as often as possible. Eating unprocessed vegetables in general can do wonders for your health and overall well-being by improving and preventing illness and disease. Kale, however, takes the (butter-less, sugar-less, superfood packed, vegan, organic, artificial flavor-less, GMO-less) cake. 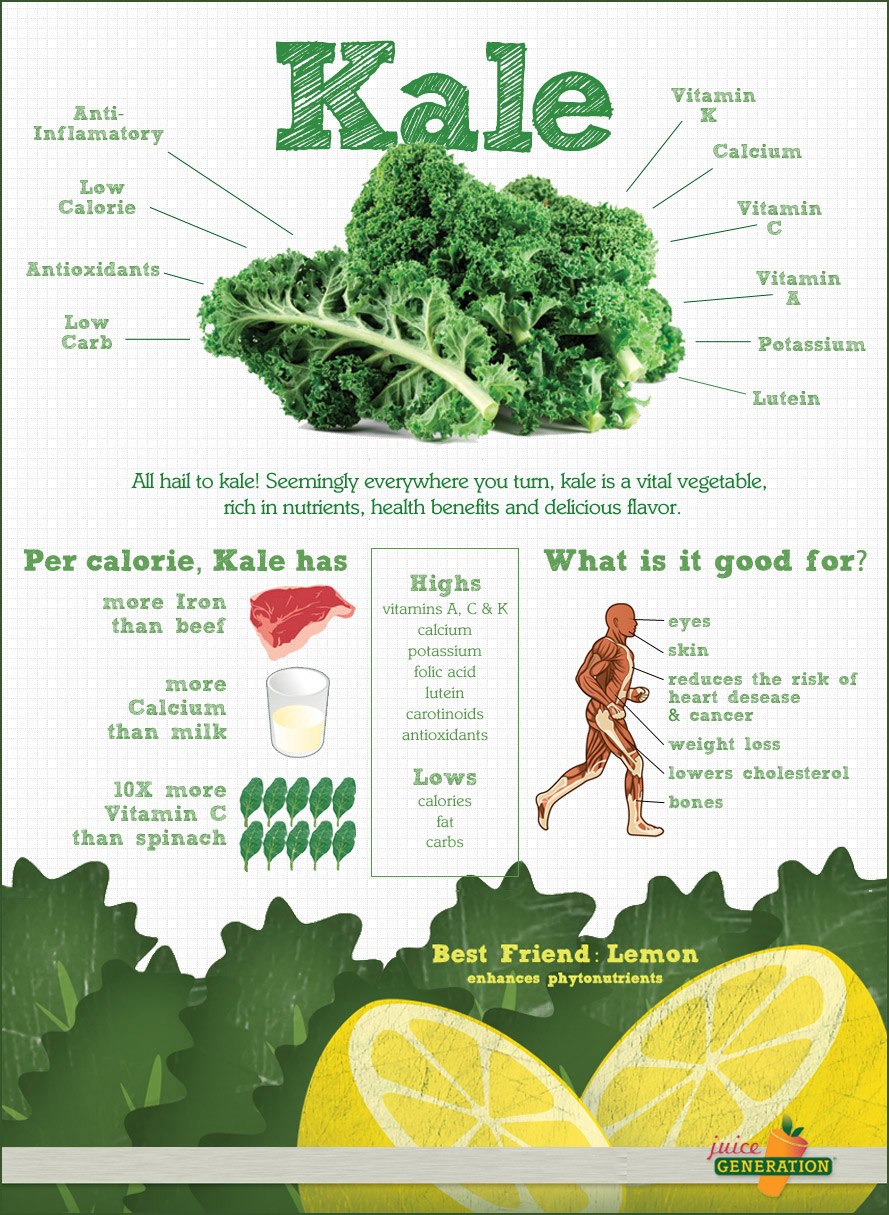 Kale is believed to protect against cancer and significantly lower cholesterol if eaten regularly. Additionally, it is packed with vitamins A, C, and K, all of which are antioxidants. Beyond antioxidants, the fiber content of cruciferous kale binds bile acids and helps lower blood cholesterol levels and reduce the risk of heart disease, especially when kale is cooked instead of raw (WebMD).

Further, it contains beta-carotene, which can protect against chronic diseases, and carotenoids, which protect the eyes. You’ll also find folic acid, vitamin B6, manganese, and potassium in kale as well. The  manganese in kale helps your body’s own antioxidant defense system,  superoxide dismutase, protecting you from damaging free radicals. Its  folate and B6 team up to keep homocysteine levels down, which may help  prevent heart disease, dementia, and osteoporosis bone fractures (How Stuff Works).

As summer approaches, give this leafy green a place in your garden or on your dinner table. It also thrives in cooler weather, providing a healthy, in-season, option during the cooler months of the year. With a vegetable as versatile as this, there are MANY things you can do with it. Get creative! Some of my favorite ways to eat kale are:

You can also add it soups, stews, stir-frys, salads, egg dishes, or casseroles. Or top pizzas with kale for added nutritional goodness. Steam kale for five minutes to make it more tender or eat it raw. You can also substitute it for spinach or collard greens in recipes.

There are thousands of recipes out there for kale. Or just do like I do and add it to almost every dish you cook!

What are your favorite kale-inspired recipes?